As a teenager you are confronted by a number of archetypes, whether sporty/geeky/outsider in flavour they are usually based on some fictional aspirational quality: superhuman football dribbling, mathematical prowess or an impossibly handsome, brooding style. Part of teenage development is to decide which archetype you want to align with, then create the narrative which best projects this to others. If you have ever been a teenager, or shared air with one, you will be privy to frequent egoistic boasts and preening either through sly digs at authority or overt proclamations of ability. In possibly the most aggravating sitcom in a long line of aggravating sitcoms, an archetypal geek proclaims that photographic memory is a misnomer and that he has an 'eidetic memory'. This is a classic intellectual bait-and-switch: a ‘photographic memory’ is too folksy and possibly bluster, 'eidetic memory' sounds like a diagnosis or scientifically validated term, and therefore has the sweetener of being esoteric enough that other pseuds/sycophants would not question it. There are defined differences, however, eidetic memory is a type of memory that is almost complete compared to reality and can consist of visual, auditory or other components. Photographic memory is used more to describe the ability to immediately capture a large amount of text or numbers and recall it perfectly (think of Mike, the character from another televisual source of aggravation, Suits). Let’s look at the evidence.

An ingenious test for photographic memory is to show an apparently random dot-plot one day, then a different one the next. The test subject should be able to mentally fuse the two patterns together to make the intended complete image without ever seeing them together at the same time. 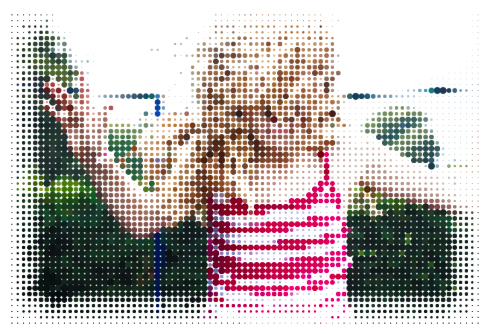 If photographic memory truly existed, there would be plenty of evidence of individuals demonstrating the skill, possibly to rapturous media attention. Look no further than Elizabeth Stromeyer. In all of scientific history Elizabeth Stromeyer is the first, and only, person to achieve this. However (before the Sheldon fans ignite a vicious tweet-storm), the experimenter who tested her also happened to be her fiance, and she has also refused to be tested in any way since. I guess we can safely put this in the evidence folder marked 'spoon-bending and breatharianism'.

"But what about that lady I heard about who can remember small details from any day in her life - whats-her-name?"

Yes, well this is a case of mistaken identity: Jill Price was the first person to be diagnosed with hyperthymesia, a condition akin to OCD where the individual obsessively autobiographies every aspect of their lives. Excessive, relentless repetition and diarising will lead to strong mental connections, and monks who commit to a life of religiously reproducing the Bible have similar capacities.

Here is where it gets really interesting: a financial incentive for anyone with a photographic memory to come out of the woodwork. No winners in history have declared themselves possessing eidetic or photographic memory. Instead they work extremely hard at developing mnemonic strategies (a la Sherlock's 'Mind Palace') which incidentally do nothing to help them remember where they parked the car, or the name of that person they were introduced to 5 minutes ago.

Why do we delude ourselves?

We are the easiest person to fool, and trying to convince someone else often means lying to yourself first. In “tribes” that value intelligence above all, being blessed with natural talent is the easiest way to gain credibility (albeit briefly) for a dopamine-based surge of validation. In reality, nearly every skill attributed to “natural talent” has years of hidden practice and graft behind it. Characters like Mike from Suits allow people to believe that they can have a super-power which levels the playing field against apparently better prepared (or even financially privileged) opponents. These characters are like superheroes for adults who don’t believe in superheroes. We can also do this in a business context, deluding ourselves into believing we have special attributes or skills that allow us to beat the competition, no matter how much research or experience they may have. The reality is that you are only opening yourself to an opportunity to be embarrassed when put to the test. The only true path to success is that of the trained mnemonists, not the deluded eidetic memorists: perseverance, humility and self-awareness.