Drake is a celebrity. Drake likes to celebrate success: not only his own but any other sports star/team that he can hitch his applecart to. When a team or athlete does particularly well Drake is there to cheer, backslap and hoover up any reflected glory. Like any good brand he wants to align himself with other successful brands. Understandable. This craven approach is starting to backfire, however, as clubs are beginning to associate their subsequent fall from grace with Drake’s social visit: 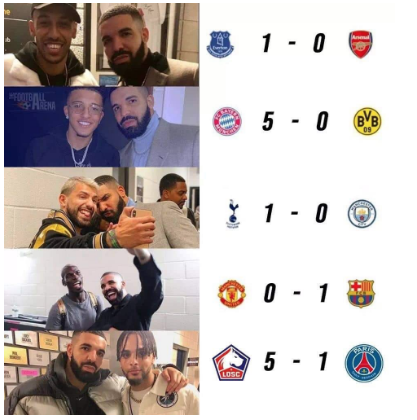 Drake’s apparent gift is not limited to football: affecting basketball, MMA, American Football and most recently boxing. Anthony Joshua was the overwhelming favourite, but after posing with Drake was by all accounts fairly beaten by a huge underdog Andy Ruiz Jr. So is this modern scapegoating, some kind of toxic personality disorder, or even voodoo? Thankfully none of the above: the Drake curse can be ably explained by mundane statistical reasoning. ‘Regression to the mean’ is a statistical tendency for measured events (in which chance plays a part) to become more moderate following extreme ones. This means that if you perform better or worse than your average in any particular activity which requires at least some luck, then you will likely regress closer to your average the next time. While I was a science teacher, I would often be amused by teenagers trying to assert their dominance through purported displays of skill. The simple act of throwing an object into a bin would be imbued with earth-shattering significance if the distance was greater than 5 feet, and any success would be confirmation of the throwers ultimate claim for supremacy in the classroom. Any request to repeat any successful ‘basket’ would be rebuffed as the evidence was already presented and sufficient. The students were unknowingly acknowledging the role of luck, and they intuitively understood that they would likely regress in the next attempt and miss. This intuitive understanding is a little dangerous, however, as concocting a narrative to explain this is not within the grasp of most teenage students, so when failure does eventually occur the temptation was to blame other external factors (“You put me off!”, “The wind caught that one!”). Daniel Kahnemann, the nobel prize winning psychologist, also noticed this tendency to create a narrative fallacy when confronted with regression, and used an example of a ski-jumping commentator’s words: "Norway had a great first jump; he will be tense, hoping to protect his lead and will probably do worse” or “Sweden had a bad first jump and now he knows he has nothing to lose and will be relaxed, which should help him do better." This narrative fallacy also affected attitudes towards feedback. During Isreali Air Force pilot training, Kahnemann heard instructors confidently reporting that pilots would uniformly perform better with scolding after poor efforts, and perform worse after compliments for a good performance. The key takeaway is that all actors in the training, ski-jumping or in my classroom were over-estimating the role that any of the participants had in the outcome. The pilots were never in complete control of the plane, and the instructors were never in complete control of the pilots: luck had a greater say in the outcome but the instructors narrative (or ego) did not accommodate for it. Drakes presence in the dressing room is akin to the pilot instructors compliments after a good (or essentially a statistically extreme) performance. The lessons for business is to refrain from mapping a false narrative over any success or failure that occurs. Want to take credit for a new big contract/client? Go ahead but that is no assurance of excellence, or the success of the next pitch. Convinced of another employees incompetence because of a recent failure? Be patient. The overwhelming likelihood is that the next performance will be less extreme, and that may be down to chance (not the rapper!).