A Love Letter to WinAmp: Your Ex-Favourite Music Player

If you follow the SwiftCase Productivity Podcast, you'll know we've recently been discussing music in the workplace, and how it can bring a team together.

In keeping with this theme, it got me thinking about how we used to consume music during the early days of MP3 in 2000. A sudden wave of nostalgia strikes when I think back to everybody's first favourite media player of choice: WinAmp. 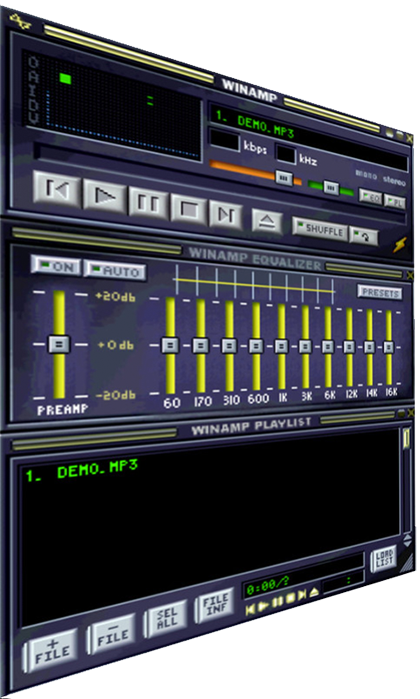 WinAmp was an audio player application of the 90s. It garnered massive popularity as THE alternative to Windows Media Player. Lightweight, simple to use and could easily be personalised to exactly what you need, WinAmp was the all-in-one solution for millions of music lovers across the world.

You knew as soon as you started it up for the first time, and you get hit by the sample slogan audio file "WinAMP... it really whips the llama's ass!" you were on to a winner... but what made it so special?

Programmers flocked to the application due to the sheer amount of development and customisation options they were handed, which in turn led to a vast array of features that could be shared online for people to download.

If you wanted to show your support for your favourite band, you could usually download a band-themed skin for the program, which sometimes even came directly from the band's marketing team.

Visualisers were a massive hit in the early days, and no longer were you limited to stock visualisers, you could download an entire catalogue of them.

Plugins and tools were also available, due to the fantastic API options that were available to developers, you could do just about anything with it, from hooking it into your favourite game to creating huge feature-rich equaliser to really tweak the sound to your taste or gear set-up.

Way Ahead of Its Time

It wasn't just the vast array of customisation options that made WinAmp the king of music players - it was way ahead of its time.

WinAmp made streaming music available in the early stages of its life cycle, allowing you to stream both audio and video via the SHOUTCAST streaming service.

Due to the diverse array of configuration options, the software allowed audiophiles to get the most out of their sound cards and set-ups. Still to this day, you likely couldn't get audio quite like WinAmp out of a streaming service such as Spotify

When it came to managing your music files and curating playlists, Winamp was second to none. The ability to use it's in-built 'Smartviews' combined with your own plugins and preferences, made it built to serve a user purpose and their own workflow.

If you want a brash, in-your-face player, it can be that... but what I liked most about my WinAmp set-up (compared with the likes of iTunes), is that it was minimal, out of my way and very light on system usage, so I could just enjoy my music and get on with my tasks.

So, what happened to WinAmp?

Like many unicorns of the 90s, the creators 'Nullsoft' (originally composed of just 4 developers) had an overwhelming success on their ends and were acquired by corporate heavyweights, AOL.

With millions of dollars behind it, why didn't Winamp push on? Back in 2012, Rob Lord, the initial general manager of WinAmp, told Ars Magazine:

"There's no reason that Winamp couldn't be in the position that iTunes is in today... if not for a few layers of mismanagement by AOL that started immediately upon acquisition".

WinAmp's lead developer entirely agreed with the statement, citing AOL was always too "bogged down with internal politics" to make any significant progress.

WinAmp is still available today, albeit with significant decline in support from a dying community. Unfortunately it will always be a case of "what could have been" with WinAmp - and perhaps another business story of too many cooks spoil the broth.

But regardless, I look back on WinAmp, like many of it's former users, as THE tool of choice in the dawning of a new age of digital consumption, whose features continue to inspire giants of the tech world to this day.

So thank you, WinAmp, you really did whip the llama's ass.