You know about viral marketing and virtual reality, but you’ve probably never heard of Alternate Reality Gaming. This type of advertising is so intense it can literally get in your face.

An Alternate Reality Game (ARG) is the catch-all term for an interactive networked narrative that uses the real world as an integral platform and combines multiple media forms (transmedia) to deliver a detailed fictional experience. One game generally runs for about 2 months, starting with a gradual and subtle exposition by establishing its presence both online and in physical locations around the world.

QR codes, social media, graffiti, posters, brochures, CD’s, USB sticks, sign plates, SMS, email, screens, radio, websites, live events and video are just some of the mediums used together in an ARG project. It’s a brilliant example of how technology and transmedia techniques can spawn new and exciting avenues in digital marketing. Let's discuss what influences this and look into some condensed case studies. 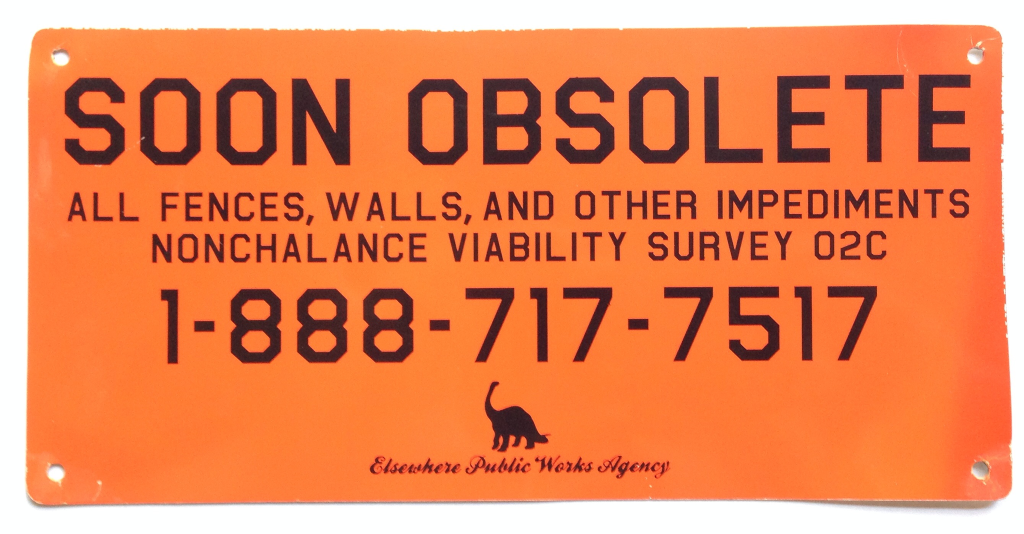 Metal sign made for the fictitious "Elsewhere Public Works" for ARG "The Jejune Institute",
played in and around San Francisco, CA 2007-2011

In recent years, this practice has made its own place in the realm of marketing. This type of “game” has its roots pretty far back, with the first definitive ARG released in 2001 to promote the Steven Spielberg film, A.I. Artificial Intelligence. Similar campaigns for other media, like video game Halo 2, or Nine Inch Nails’ Year Zero album, have caused an incendiary impact and resulted in a viral sensation.

It uses real life, your life, to navigate elaborate stories within stories that is unique to the product and brand. By using the everyday environment as a stage, there are myriad possibilities to engage with campaigns that make up bits of the story as you go along, compelling the person to get involved – even if they don’t quite know what they’re getting into.

ARG's typically incorporate many multimedia elements, both physical and intangible, but it always operates with the Internet at its core; it’s sometimes described as the first narrative art form native to the Internet because the storytelling relies on the two main activities conducted there: searching for information, and sharing information.

There are countless layers involved in creating an ARG, requiring specialised skills, making the process complex and resource / time consuming. Workflows need to be carefully thought out and many considerations need to be made about how to guide the consumer from one platform to another to progress in the campaign.

This basic example workflow below gives you a taste of how heavy-duty transmedia projects must be: 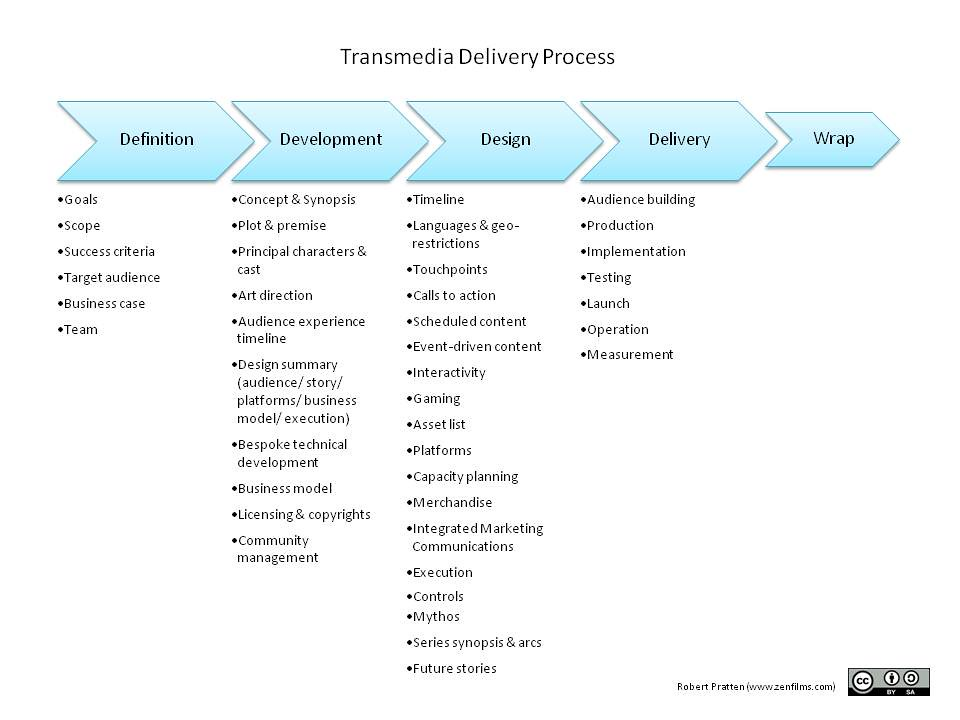 Why is transmedia so powerful?

Transmedia storytelling is no joke. It has the potential to reach nearly every type of person, no matter their lifestyle; the concept or message that is being shared is done so through both analogue and digital formats. You don’t need to keep up with a social circle or own a phone to notice that the poster on that lamp post doesn’t look quite right.

Physical clues in the form of familiar everyday objects, like street posters, are all the more alluring if you don’t know what they’re meant for or where they come from. They blur the line between fiction and reality, making you question what’s real and what’s part of the game.

Secondly, the purpose isn’t to force awareness of a commodity, brainwash with a catchy corporate slogan or change the way people think; it’s to tell a story, give a one-of-a-kind experience and remind the player that they and their actions are significant in every reality.

After all, your favourite story is likely to be one that involves you or has personal value to you. From performance art and physical treasure hunts, to a code embedded on an audio track or a message hidden in a frame of a video, the possibilities to build an entire world centered wholly around your product’s concept and your customers are pretty much endless.

In addition, people are naturally, helplessly intrigued by the mysterious and unexplained; there’s bound to be someone you know who loves conspiracy theories and the supernatural.

An ARG is a whole new mystery for you to uncover with your own hands in real time. They are tailor made to engage, providing a sure-fire source of genuine excitement and infectious anticipation.

Even if you aren’t familiar with the actual product, it’s difficult to ignore all the action going on around you, especially since you can only take part in an ARG event within a set time frame with no determined ending date. If you find yourself lamenting about how boring your life is, taking part in something like this could quickly become a riveting obsession.

A wildly successful instance of this comes from Halo; a popular video game series created by Bungie and currently being developed by 343 Industries.

It has grown to include novels, comic books, audio plays, live action web series and an upcoming live action television series. Its ARG campaign, ‘I Love Bees’, wove together an interactive narrative set in 2004 and then a War of the Worlds style radio drama set in the future which was broken into 30–60-second segments and broadcast over ringing public payphones worldwide. 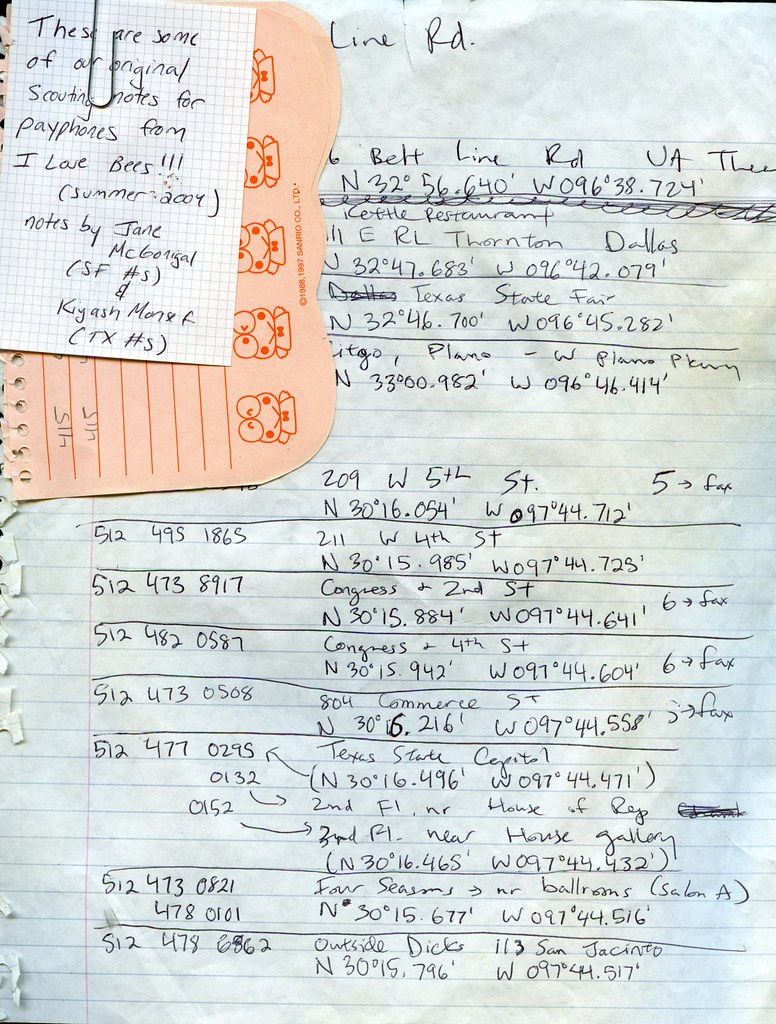 This was carried out by the ARG production company, 42 Entertainment, who have put together other large-scale projects like this.

It pushed “players” outdoors to answer phones, create and submit content, and recruit others – which would raise even more awareness and repeat.

The entire ordeal was massively successful, finding its way onto television during a presidential debate, and becoming one of The New York Times' catchphrases of 2004. Partly due to this attention, Halo 2 sold $125 million in copies the first day of release.

Weisman, founder of 42 Entertainment, stated that the goal of I Love Bees was to utilize every person who interacted with the game, and to use any electronic resource to do so, saying:

"If we could make your toaster print something we would. Anything with an electric current running through it. A single story, a single gaming experience, with no boundaries. A game that is life itself."

In this way, ARG becomes more than just marketing – it's innovation, it’s art, and it’s something truly special.

As part of the Year Zero ARG in 2007 (also executed by 42 Ent), fans of Nine Inch Nails discovered USB drives in concert bathrooms with unreleased songs from the Year Zero album that were to be leaked for the community, by the community.

They were led to find websites that tell the intricate story of a dystopian future occurring in 2022, ‘Year Zero’, which bled out into the present world. Players received “resistance kits” containing themed buttons, posters, stencils, bandannas, and in some cases, pre-paid phones to be used for calls interacting with in-game characters. They then created real graffiti supporting the game's fictitious Art Is Resistance movement, immersing themselves in the fictional world. 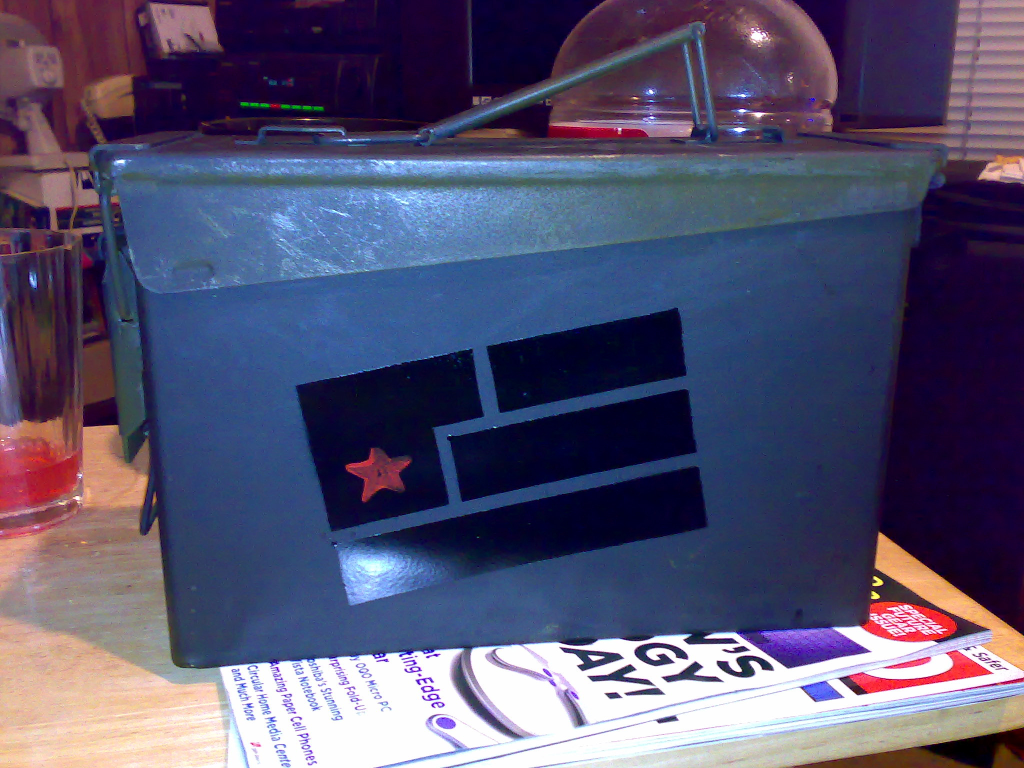 An Art Is Resistance Kit 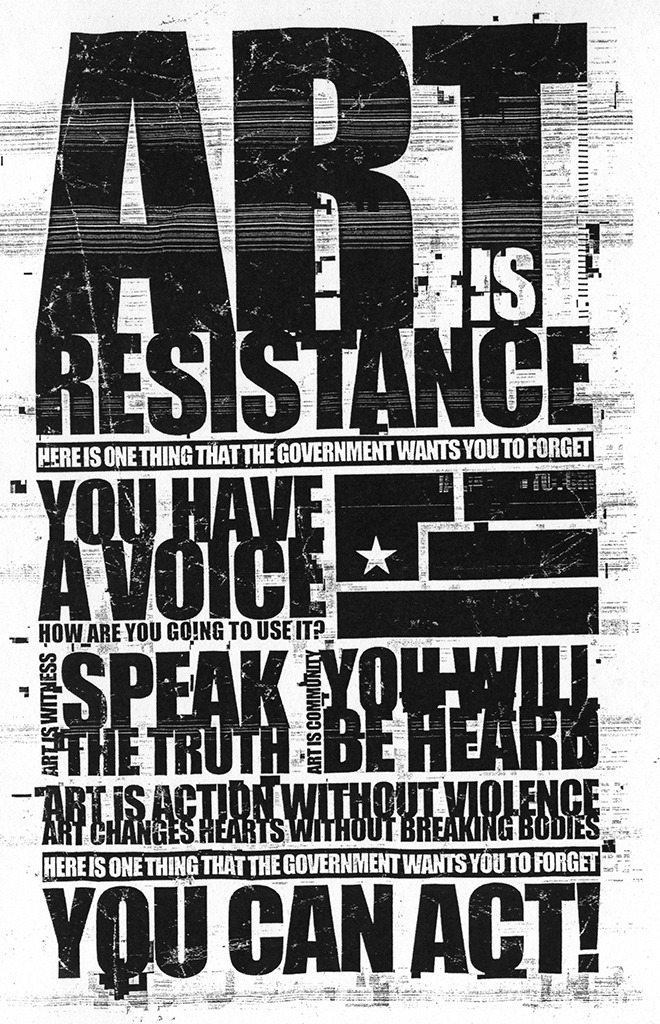 The band also held a surprise pop-up concert in L.A for participating fans in the form of a clandestine meeting, including a speech made by a “resistance member”. The concert was then interrupted by an orchestrated SWAT team “raid” on the meeting; delightfully dramatic.

The physical Year Zero album was released in digipak packaging with a black, heat sensitive CD that turns white when heated from playing and reveals a binary sequence which leads to several in-game websites. Not only is this an inventive and stylish aspect of the game, it makes for a fascinating collectible and great incentive to purchase the physical album. 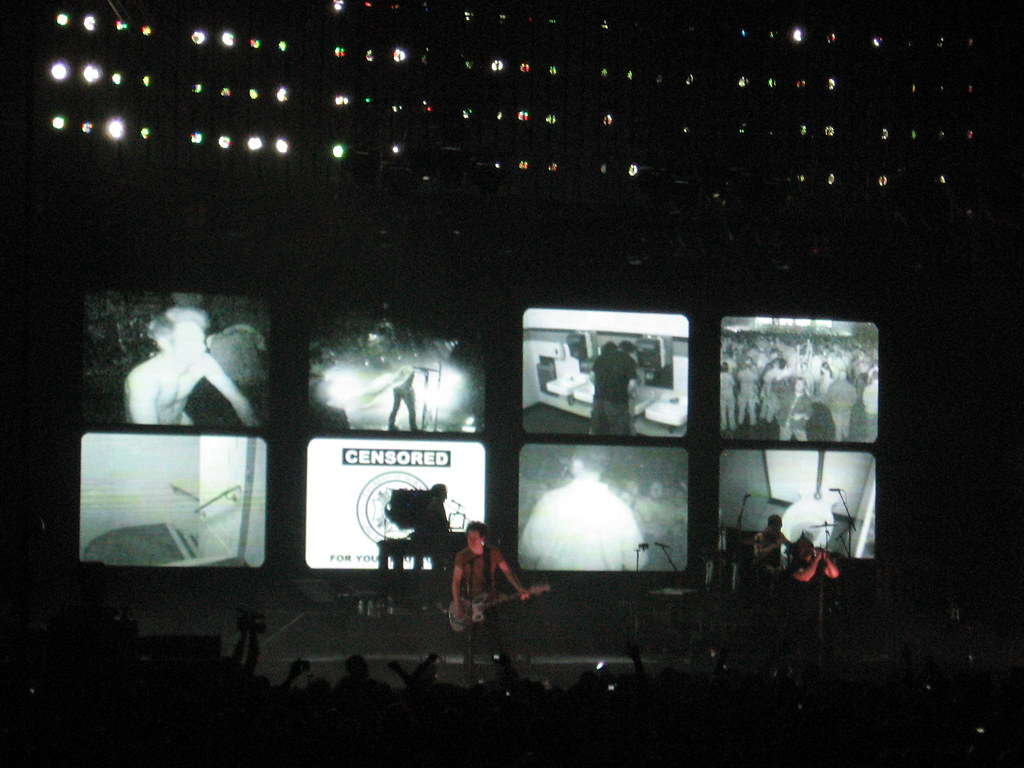 As a business model, ARG’s tend to be nearly exclusively free to play or experience, to be as inclusive as possible to people of all types as potential players. Straying away from this status quo has not proved successful thus far; an example being Majestic, a subscription-based ARG from EA that faced commercial failure because of a lack of players.

Perplex City, created by Mind Candy, is an accomplished ARG aiming to become a fully self-sustaining venture through selling collectible puzzle cards that link into the alternate reality facets of the game; a unique feature for an ARG.

After this commercial concept racked up some controversy from enthusiasts believing in free play, the company expressed that purchasing the cards is optional although encouraged, and does not directly affect any aspect of the game. This let the audience choose between following the main ARG for free, just buying the cards or doing both if they wanted.

By integrating the card system, but making it more of an additional supplement than a core mechanism, it led to the model being broadly accepted since; many players seem to buy about 20 or 30 cards and occasionally interact with the web elements.

This demonstrates the benefits of not bowing to consumer grievances right off the bat, but also avoiding arrogance and respecting customer freedom of choice at the same time. Consideration for different player preferences doesn’t mean much if it isn’t built into the actual business model.

I can confidently say that alternate reality gaming is my favourite approach to marketing, due to the sheer amount of creative and collaborative effort that goes into it. It can only deliver captivating and distinctive results each time but as a principle, also encourages a real connection between consumer and product.

It endorses problem solving and critical thinking, and builds enthused and dedicated communities like no other, bringing together writers, web developers and puzzle creators from all around the world. ARG marketing really puts the consumer at the forefront, right where they should be.

Naturally, there has to be tons and tons of work that goes into carrying out an ARG operation in its entirety: effort, organisation, resources and making sure you’re not breaking any rules. Certain “games” can tip toe the boundaries of privacy and intrude just a bit too far into real life for some players.

To pull something like this off, you would need extensive resources, a lot of time and likely the contribution of external partners and collaborators if you want to go all out. If you don’t want to lose your mind trying to keep all those workflows, you would definitely need to use project management software to keep each aspect of a transmedia campaign under control. Automating the digital components, such as SMS messages, emails and social media activities should free up resources to spend on the more dynamic, non-digital elements of the game.

However, when everything is finally put together, the payoff can definitely be immense and incredibly impressive. As a method of promotion, it prioritises interactivity and enhances the actual product, making it much more memorable and enjoyable to experience after the game.

What other marketing strategy can make your clients come together with such real passion? It has massive potential and is probably the most personalised and engaging way to put your brand out there.

Plus, with all the constant innovations in technology, ARG campaigns will become increasingly creative and generate even more ways to reach more people. Things can only get bigger and better here on out – so game on.